The latest addition to Rihanna’s Savage X Fenty collection has quickly become the butt of the joke on social media.

The singer, 33, is currently selling a pair of open-back, crotchless leggings as part of her lingerie line, and the revealing pants are causing quite a stir.

As first reported by Refinery29, TikTok user @fathermarge showed off the leggings in a video last week and said, “Things are getting a little crazy.” The video has since been removed, but more than 3.2 million TikTok users commented on it first, and it was clear that they had some pretty strong opinions about the unconventional look.

According to the product website, the leggings are made of a “sheer soft mesh fabric” and feature “an open strappy back for a playful surprise. In other words, the high-waisted pants have a giant cut-out in the derrière.

Available in lavender and black shades and in sizes XS-3X, the leggings normally retail for $50, but VIP Savage X Fenty shoppers can get them for $40, and new VIP members can score them for $20.

After learning about these wild and crazy leggings, some Twitter users felt inclined to express their confusion.

The majority of Twitter users seemed to be pretty turned off by the pants.

After glancing at the product reviews on Savage X Fenty’s website, it seems like a great deal of customers are definitely digging the revealing leggings, calling them “comfortable” and “stretchy.”

“It is pretty clear these aren’t the type of leggings you are going to wear to the grocery store, but as something sexy and different for around the house or to sleep in,” one customer wrote.

Another left the following comment: “Love these leggings. They’re super comfortable and well made. I like that they’re kind of sheer mesh but it’s a double layer so they don’t feel insubstantial or like they’re going to fall apart. The crotchless feature is pretty great.”

So, would you rock them?

The former “Fuller House” star has three children with her husband of 24 years. Candace Cameron Bure has one simple rule when it comes to who gets to date her kids.

The former “Fuller House” star opened up to Us Weekly on Thursday, June 10, about the one trait that she hopes her children’s future significant others have.

“When it comes down to it, I just want (their significant others) to love Jesus the way I love Jesus,” she said. “That’s all I really want. Is that too much to ask for? Yeah. It’s not too much.”

In the past, Cameron Bure has expressed her excitement for her children to begin dating and was pretty easygoing about the idea.

“I feel great about them dating in the sense that they have a good head on their shoulders,” she told Us Weekly in 2019. “They’re all looking for good people to hang out with, or date, looking for a wife, looking for a husband and I’m proud of that. … I wish that they would date more in a sense!”

More recently, the actor has said that her oldest is “dating a lot now” despite previously thinking that her daughter wasn’t going on very many dates at all.

“She just wasn’t telling me about all of her dates at the time,” Cameron Bure clarified. “She is dating, and I’m good with that. I’m happy. She has to date the right guys.”

As for Lev, her middle child is currently single. The 21-year-old was briefly engaged for just under eight months to his former fiancée, Taylor Hutchison. Cameron Bure announced his engagement last summer in a now-deleted Instagram post. In April, the mom-of-three broke the news to Us Weekly that her son was no longer engaged.

“Sorry, you didn’t get the memo?” Cameron Bure joked. “We didn’t make an announcement, but yeah, he’s no longer getting married.”

Thankfully, the couple was able to split amicably. “It was a mutual decision, so nobody’s upset and heartbroken,” she added.

If her kids are struggling in the relationship department in the future, their mom will be there to help, especially with nearly 25 years of marriage under her belt. The 45-year-old actor even admitted that she isn’t above setting up her kids in the future, either, especially if she finds a “potentially good prospect.”

“If you know they’re from a good family and you know they might get along, we’ll do [that.] For sure,” she said. As Hollywood aims to curb sexual harassment in the entertainment industry, SAG-AFTRA, the guild that protects actors, issued new guidelines this week on the hiring of intimacy coordinators.

On its website, SAG-AFTRA explains that an intimacy coordinator acts as “an advocate, a liaison between actors and production, and a movement coach and/or choreographer in regards to nudity and simulated sex and other intimate and hyper-exposed scenes,” on set.

By employing an intimacy coordinator, SAG-AFTRA argued, production is guaranteed “the safety of personnel,” as well as insurance against production delays that could arise from conflict, while actors are given “an important safety net.”

SAG-AFTRA now officially recommends that an intimacy coordinator should be involved in pre-production, on-set and in post-production.

“SAG-AFTRA has taken a huge step toward normalizing and encouraging the use of these professionals in productions large and small,” SAG-AFTRA President Gabrielle Carteris and National Executive Director David White wrote in a letter. “This is an opportunity to truly change the culture while helping to ensure the safety and security of our members while they work. It’s the latest development in our ongoing effort to eliminate sexual harassment in the entertainment industry through strategic partnerships, raising awareness and expanding contract and legislative protections.

Amanda Blumenthal, the founder of Intimacy Professionals Association, explained to “Good Morning America” that the field is a relatively new one, and really took off in the wake of the #MeToo movement. Blumenthal, who has worked as an intimacy coordinator for Freeform, FX, and Netflix, among other studios, likened the role to that of a stunt coordinator: Just as a stunt coordinator protects the physical safety of actors who perform stunts, an intimacy coordinator ensures the physical and emotional safety of an actor performing an intimate scene, she said.

“On occasion I’ve been on sets where an actor changes their mind about the level of nudity they want to show the day of filming. In these sorts of situations the actors are able to come to me and say that they’ve changed their minds, and I take this information to the director and production and I help to facilitate a new plan for the shoot that works with the actor’s boundaries but still tells the story,” she explained to “Good Morning America.” “Many actors, especially younger ones or those who are new to the industry, don’t feel comfortable speaking up in these sorts of situations without an IC present because of the power dynamic that exists between actors, directors, and producers.”

“So many actors have been traumatized while doing these sorts of scenes because there often isn’t a plan in place and actors get told to just ‘go for it’ and see what happens. This is a recipe for disaster as boundaries can easily get crossed and actors can feel violated,” she said. “Additionally, having an IC can help to mitigate instances of sexual harassment; I’ve heard from a number of actors who have been harassed or assaulted on set that they feel like the things that happened to them wouldn’t have happened if an IC had been present.”

How much sex is normal in a relationship? “Intimacy anorexia” may be the leading cause behind sexless marriages, and there are solutions that can help couples get back on track. 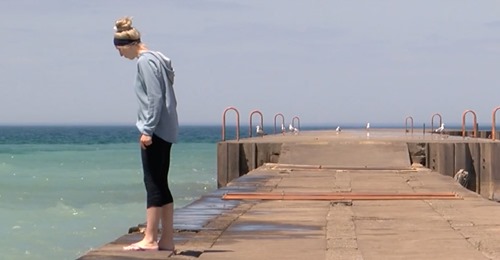 Sometimes, moms just summon the strength to do incredible things. And that’s exactly what happened this week when Alyssa Dewitt, a mother from Manistee, Mich., pulled three drowning children from a local lake.

The Michigan resident, who is currently five months pregnant, was enjoying a fun beach day with her kids when she suddenly saw arms waving in the water below her at the First Street Beach Pier.

Three children under the age of 15 were struggling to get out of the water after rip currents had pulled them deeper into Lake Michigan. Dewitt sprang into action to help them after making sure her own children would be safe.

“I ran to the edge of the pier and they couldn’t even keep their heads above water at that point. I called 911 immediately,” she told NBC affiliate WPBN.

With the wind whipping and the waves crashing, the children had a hard time hearing Dewitt and she could barely make out what they were saying, but she did know that she had to act fast.

“The best I could do was just kind of scream into the phone that I needed help, there were kids drowning,” she said.

As she was talking with 911, Dewitt put her phone down and laid down over the side of the pier to try to assist the children.

“Every time I would grab their hand and get them partway up, a wave would come and smash into us and pull them back down,” she said.

One moment from the frightening experience sticks out in Dewitt’s mind that she won’t forget.

“This part will stick with me forever. This girl looked at me and she said ‘I’m gonna die.’ It makes me cry every time I think about it,” she said. “I told her, ‘I promise you I am not gonna let you die out here; I am gonna get you out of this water.'”

Dewitt summoned the strength to pull each one of the children up and over the pier wall and she still can’t quite believe that she did it.

“I truly believe that I was meant to come here yesterday; I don’t think it was a coincidence,” she said.

Manistee City Police Chief Josh Glass described Dewitt as a “hero” and told TODAY that the city is lucky to have someone like her as a resident.

“When you have someone who puts their safety aside to help strangers, it’s amazing,” he said over the phone. “She could’ve easily said ‘It’s too dangerous to go out there’ but she stayed and her tenacity absolutely saved those kids.”

If Dewitt hadn’t intervened, Glass believes the situation wouldn’t have had such a positive outcome since the winds and waves were so strong that day. He also confirmed that all three children are “doing well given the circumstances” and that they only sustained minor injuries. Dewitt and her unborn child are also doing well.

“When we have an everyday, ordinary citizen – a mom at the beach with her own kids – that just puts the (superhero) cape on and gets to work and does something so heroic and so above expectations, I think it’s important that we recognize her,” Glass said.

Unicorns are ready for a haircut – TechCrunch

Where have all the workers gone?